The Dewsbury Blueprint:   The Dewsbury Blueprint was officially launched to great acclaim on Wednesday 5th February. However, for many, it’s not so much what is in the Blueprint, but what is missing. With the widespread concerns about the Climate Emergency and Public Health where are the Council’s plans to […]

Transforming Cities Fund:   Just before Christmas West Yorkshire Combined Authority (WYCA) made a bid for £60M from the DfT’s Transforming Cities Fund which aims to improve conditions for Cycling and Walking.   All the WYCA authorities, including Kirklees, were asked to give details of their proposals to the team […]

Friday 21st February 2019, 7.30pm Broad Oak Bowling Club Linthwaite Huddersfield HD7 5TE The 2020 awards evening will be held again at the Broad Oak Bowling Club. I do hope you can join us for the dinner and presentation of awards. Please try and bring something for the raffle, cycling […]

Dear Karl, Thank you for speaking recently to the Huddersfield Civic Society where you made an excellent presentation on Kirklees plans for a “Huddersfield Blueprint” On behalf of the Kirklees Cycling Campaign I would like to congratulate you on providing the drive and vision for this project. You have made […]

Hello everyone and welcome to the latest newsletter from Kirklees Cycling Campaign. Investment and statistics seem to be the themes running through this edition. John Lewis – Chair KCC     Utrecht Railway Station:   A couple of years ago the New Mill Choir cycling buddies made a trip to […]

Holmfirth: For the few that don’t already know, the proposals for Holmfirth, drawn up by Kirklees Council, have been roundly rejected in the consultation process. The plans have now been scrapped. This is not to say that all is well in Holmfirth. It’s geography results in it being a cross-pennine […]

Hello everyone and welcome to the latest newsletter from Kirklees Cycling Campaign.   Climate Change In recent years there seemed to be general agreement among most Kirklees councillors and officers that, although cycling was to be encouraged, it could only be financed if nothing else got in the way. The […]

Trek Valancia+ ebike for sale. Very little use so in lovely condition. 17.5 inch frame, 260 watt hour battery powering a rear hub motor. Triple chainring and 8 speed cassette. Google it for full specification and reviews. A friend of mine is selling it so contact me (Andrew Ireland) for […]

This newsletter is mainly centred around the forthcoming KCC AGM: Kirklees Cycling Campaign AGM 7:30 – 8:00pm Tuesday 9th April 2019,Cafe Ollo – The Media Centre Northumberland Street Huddersfield HD1 1RL There have been two previous attempts to convene the KCC AGM. Both of these had to be aborted because […] 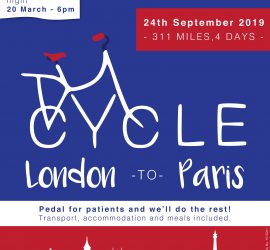 Cycle from London to Paris while supporting @stgemmashospice! This amazing trip covers 311 miles in 4 days. Suitable for all abilities. Visit https://events.st-gemma.co.uk/…/london-to-paris-cycle-for-…/ or go to their free wine & cheese info night, 6pm on 20 March. Contact Emma 0113 218 5570 or emma-h@st-gemma.co.uk. They are hosting a French-themed information evening at […]